Facts unknown about the iPhone and Apple company


Every time a when there is a new iPhone is released, people line up for days just to buy one. Sure, it looks cool. But do you know anything else about it aside from what the blogs and news sites tell you? I’ve compiled a few facts and trivia for you to think about while you play with your iPhone. iPhone Fans: Check out these surprised iPhone facts u might not be known

Right now many of you might be using iPhone5S, and many of Apple fanboy like me must be waiting for iPhone6 with an amazing design. For now, let's look at some of the interesting facts about iPhone that I’m sure you are unaware of. 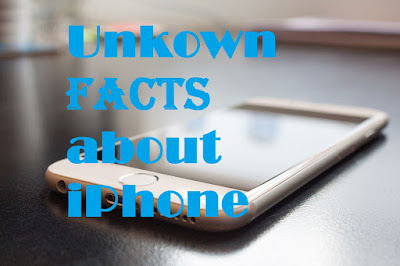 1. Apple’s iPhone wasn’t the first iPhone. Before Apple ever released the iPhone, Cisco Systems had originally patented the name. In fact, they sued Apple for calling its smartphone an iPhone. The Cisco iPhone was a VOIP phone that allowed users to call through Skype without having to use a computer. Both companies reached a settlement, and have now happily kept their rights to the name.

2. The first ever iPhone was conceptualized in 1983. Way back in 1983, Apple computer developer Hartmut Esslinger designed a landline phone that reflected iPhone and iPad features today with a stylus-controlled interface. It never saw the light of day, but it’s good to know that Apple had already been playing with iPhone ideas a long time ago. Think of how the smartphone landscape would look today if that 1983 prototype had been released.

4. There’s a Bono in every iPhone. Look closely, and you’ll see that the Artists icon in your Music app is actually the silhouette of U2 singer Bono.

5. It’s always 9:42am in iPhone ads. Apple events start at 9am and the ads are timed to appear about 40 minutes into the presentations. Since Apple knows the lead-up doesn’t take exactly 40 minutes, they pad it by a minute or two. More recent ads have now moved to 9:41.

6. Samsung makes iPhone’s processors. Samsung and Apple may be archrivals in the smartphone arena, but that’s not stopping Apple from contracting Samsung to make its computer chips. They still trash each other’s phones, though.

7. iPhones made texting the in thing. Over 22% of people now believe that sending a SMS is easier than calling, all because of how Apple presented SMS.

9. The iPhone was named Purple. Back when the iPhone was being developed, the codename for the as-yet unnamed phone was “Purple“. iPhone developers even called their section in the Apple headquarters the “Purple Dorm”.

10. Cydia is not just a random name. Jailbreaking software Cydia was named after the worm cydia pomonella, which is thought to be the most common apple worm. Cydia creator Jay Freeman probably thought he was being clever.

11. iPhone 4 ushered in Antennagate. The iPhone 4’s new metal design caused widespread problems among users after it was discovered that calls were getting disconnected when the phone was held a certain way. It became such a serious issue that it even earned the moniker Antennagate.

13. 200 patents, 1 iPhone. Since the iPhone was released in 2007, Apple has owned more than 200 patents relating to the iPhone’s technology. That’s a lot of patents for one small phone.

14. The Jesus phone. Some media people dubbed the iPhone the “Jesus phone” due to the near-religious fervor among Apple fans that met the first iPhone announcement.

15. Steve Jobs punk’d Starbucks. When Apple CEO Steve Jobs first introduced the iPhone in 2007, he made a prank call to a nearby Starbucks and ordered 4,000 lattes. He cancelled it immediately, which was probably a good thing for the poor barista who took that call.

Got a trivia I don’t know about? List it here!
I’m sure there are many more interesting iPhone facts and trivia out there, and if you know of any which I missed here, do let me know via comments. If you find this article interesting, do share it on Facebook and Google plus with your friends.